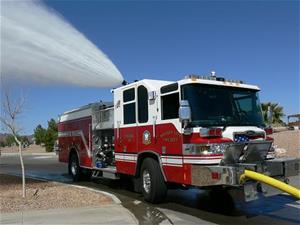 Funded through a Homeland Security Grant for its ability to respond on chemical, biological, radioactive, nuclear and explosive emergencies. The Pierce Quantum is the departments 1st out unit and is equipped with a 1500 gallon-per-minute pump, 500-gallon water tank, 40-gallon foam tank, decontamination shower, detection equipment, vehicle extrication equipment, and a full complement of ground ladders.

During major incidents, the apparatus is utilized by callback personnel. The unit has a 1250 gallon-per-minute pump, 500-gallon water tank, and ground ladders.

The departments 75 Foot Quint is utilized as the 2nd out unit and is equipped with a 1750 gallon-per-minute pump, 500-gallon water tank, vehicle extrication equipment, and a full complement of ground ladders.

The unit is a 4-wheel drive off-road utility/support vehicle which serves many roles in the department. The apparatus has a 500 gallon water tank and a 150 gallon-per-minute independent drive foam induction pump, on-board air cascade system, and auto extrication equipment.

In an effort to fulfill the emergency transport needs of the community, two of the four units are staffed daily. The third unit in utilized for special events and by callback personnel during major incidents. The fourth unit is utilized as a reserve transport unit.